Halloween is one of my favorite holidays. Children are given a chance to bring their imaginations to life. Every boy and girl has to think about what they are going to be and then make it happen. 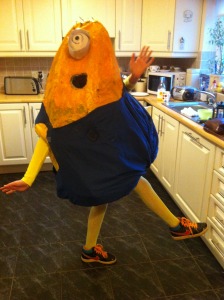 While school is about memorization and play is often about computer graphics, Halloween is a fabulous opportunity for kids to let their minds run free.

The whole process of creativity is on display. First, conceive of an idea, and then bring it to life. The reward is not only the admiration of peers but a veritable cornucopia of treats.

One would think that the calendar would be filled with chances for children to use their imaginations but sadly this is not the case. As technology improves, kids are being handed gaming toys from the age of four.

Why would a kid pretend a stick is a sword, when he can have a four headed lizard man melt a bad guys head off with lava breath? Yes, technology and graphics are that good but at what cost?

Ever try to build a minion from scratch? I have. While the finished product didn’t come out as we had planned, it still looked pretty cool, and the time I spent making it with my daughter was priceless.

Seem daunting? It’s not. There are youtube videos about how to make just about anything. Don’t be afraid. Encourage your child to imagine whatever they want. Then help them to realize their dream.

Yes, it’s easier to buy a costume, but where is the fun in that? Just make sure that you explain that the costume may not come out exactly as it looks on-line.

A site by Red Man Media